SACRAMENTO, Calif., June 18, 2019 /PRNewswire/ — Pho Hoa Noodle Soup, the leading U.S.-based Vietnamese food franchise, announced on Friday, June 14 that they will be offering new franchisees the opportunity to have all royalty fees waived for one year. This announcement comes shortly after Pho Hoa was ranked on both Entrepreneur’s Franchise 500 and ranked #2 in the Asian food category on Entrepreneur’s Top Food Franchises List.

The promotion for one year of free royalties will be offered to any new franchisee that is looking to open either a Pho Hoa standalone location or a Pho Hoa that is co-branded with their sister franchise; Jazen Tea. Franchisees who co-brand with a Jazen Tea will have royalties for both brands waived for an entire year.

The company is well positioned for today’s business environment with the Fast Casual concept leading the restaurant industry growth over the last decade and Asian Food restaurants leading the industry’s growth worldwide. The organization has laid the groundwork for franchise expansion with simple operations and healthy menu offerings at affordable prices.

“With our recent ranking in the Franchise 500 and eight new locations opening in the next few months, this promotion is part of our strategy to capitalize on this momentum,” says Kan Simon, the Franchise Development Consultant for Pho Hoa Noodle Soup and Jazen Tea. “We’re confident that once a franchisee has joined our system, they’ll see how successful they can be and want to stay. We have franchisees that have been with us for over 20 years and others who have gone on to become multi-unit owners. We believe in the Pho Hoa brand and what it can bring for our franchisees.”

The startup cost for a standalone Pho Hoa location ranges from $226.1K to $436.7K and $340.6K to $635.4K for locations that are co-branded with Jazen Tea. For more information about franchising opportunities with Pho Hoa Noodle Soup and Jazen Tea, visit PhoHoa.com/franchising.

About Pho Hoa and Jazen Tea

Founded in 1983, Pho Hoa Noodle Soup now operates in 6 countries internationally, and continues to offer delicious and healthy pho noodle soup at an affordable price. As one of the largest Vietnamese Fast-Casual dining chains in the world, quality and consistency remain the company’s top priorities and have been the driving force behind their success as a franchise.

Jazen Tea was founded in San Jose, California in 2012 and has since expanded to 20 locations in the U.S. and Canada. The company specializes in creating fresh fruit and boba teas, made with real fruit and high quality tea leaves. Jazen Tea was recently featured by Franchise Gator as one of the industry’s Top Emerging Franchises.

pho-hoa-ranked-as-one-of-the-top.jpg
Pho Hoa Ranked as one of the top Franchises of 2019 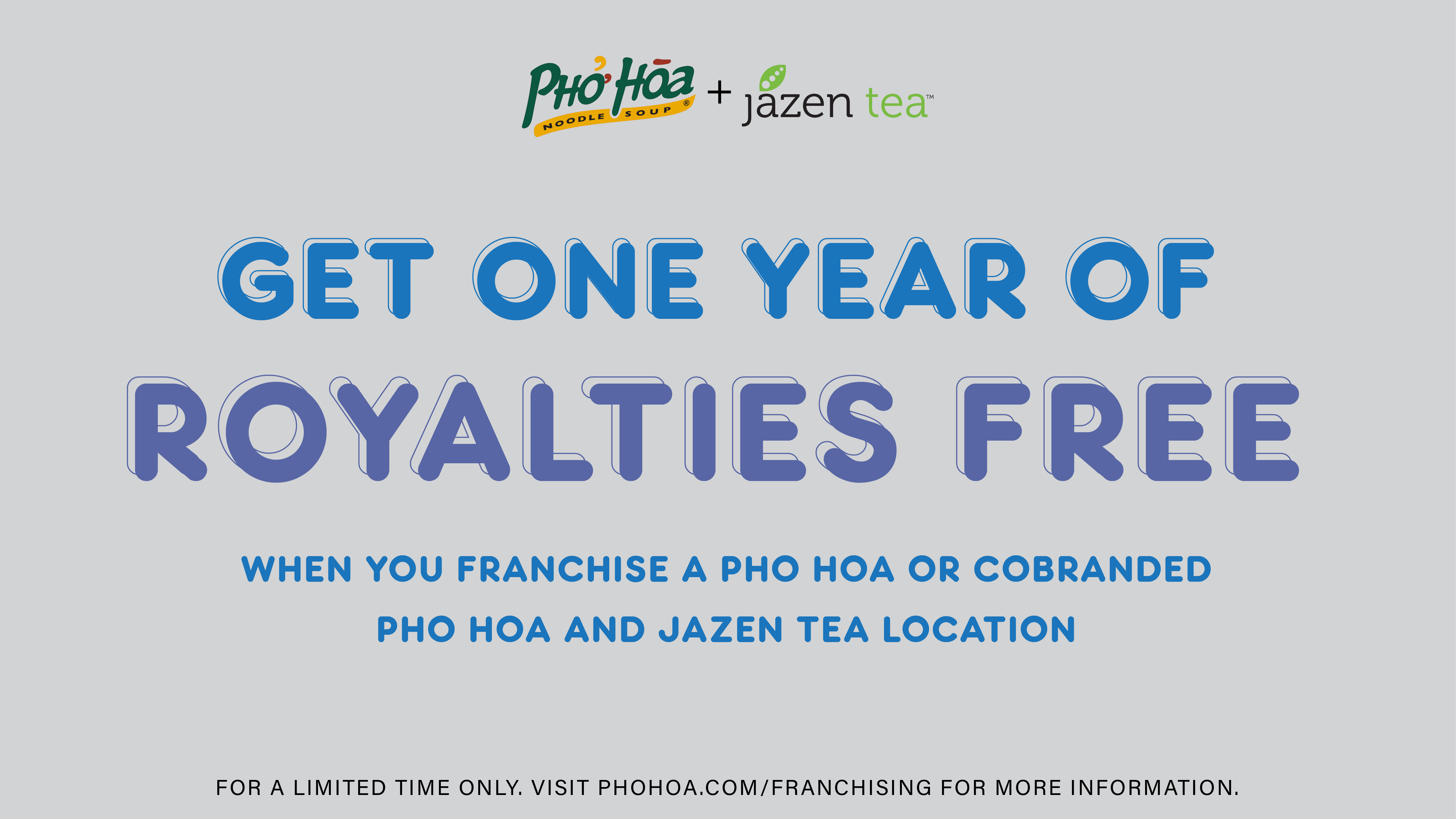