Nearly 11,500 consumers were polled for the study, which also reveals consumers’ QSR dining habits, brand preferences and in-restaurant technology use.

“In this year’s study, we saw that scores on the Composite Loyalty Index for QSR brands across all categories declined from last year,” said Brad Christian, chief customer officer at Market Force Information. “We attribute this to two factors: consumer expectations of the QSR experience are rising, and, in many cases, execution at these restaurants is declining. As our research continues to show, delighting guests by providing an exceptional customer experience is a key differentiator in an incredibly competitive environment.”

In-N-Out fans are known for their fierce loyalty and – in many cases – their pleas for this regional burger chain to bring a location to their town. The California-based chain ranked No. 1 among burger chains in Market Force’s 2018 QSR study for the second consecutive year, followed by Culver’s in second place and Five Guys in third. In-N-Out also received the highest scores across all QSR food categories studied, making it America’s favorite QSR across the board. On the flip side, Burger King, Jack in the Box and McDonald’s ranked lowest among the 13 burger chains studied. [See Graph 1]. 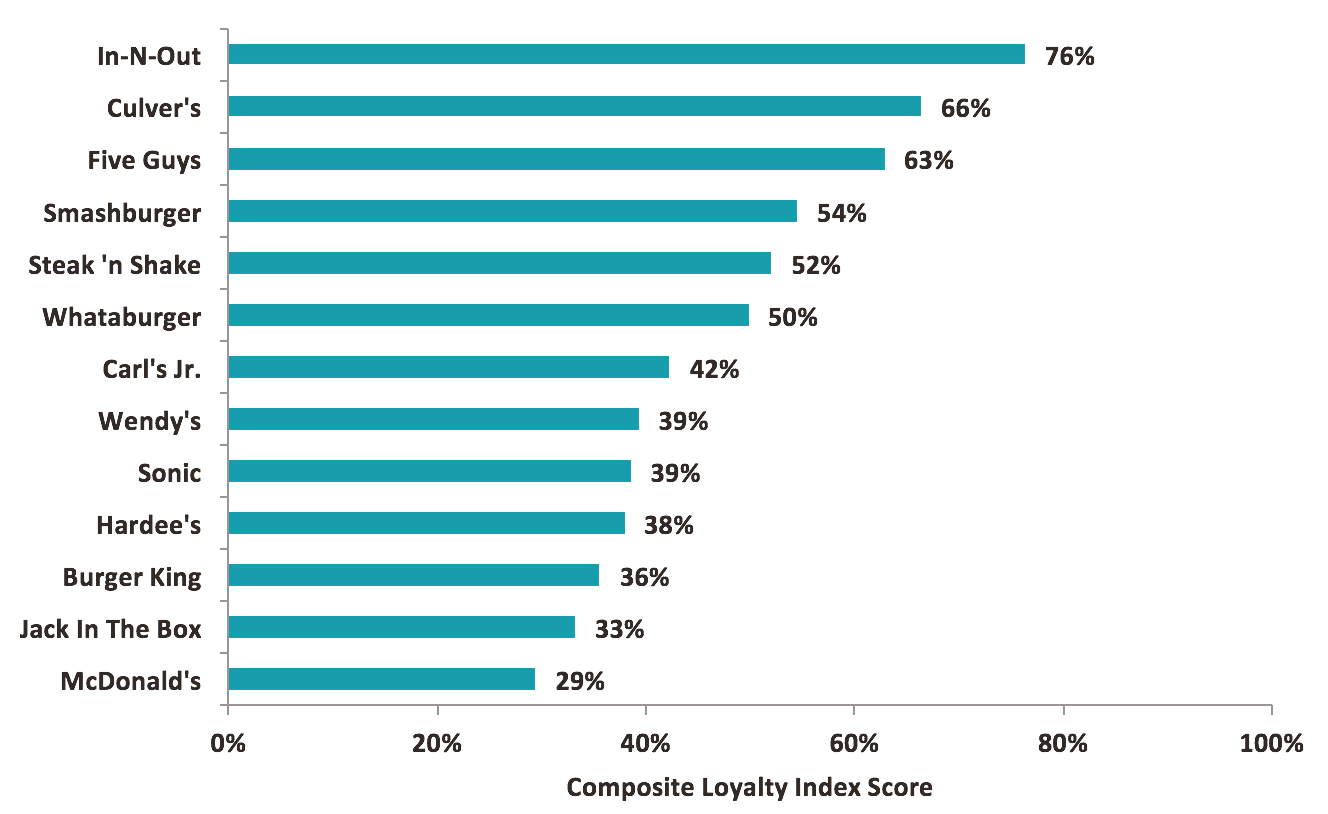 In-N-Out was not only the favorite QSR burger brand overall, but it also took the top spot in all eight customer experience categories, including value, food quality, service speed, staff friendliness, cleanliness, atmosphere, healthy options and curb appeal. Five Guys and Culver’s also consistently performed well, with Five Guys ranking second for food, speed of service and cleanliness, and Culver’s ranking second for atmosphere, friendliness and curb appeal. Results were based on the study participants’ most recent visit to a given restaurant. [See Graph 2.] 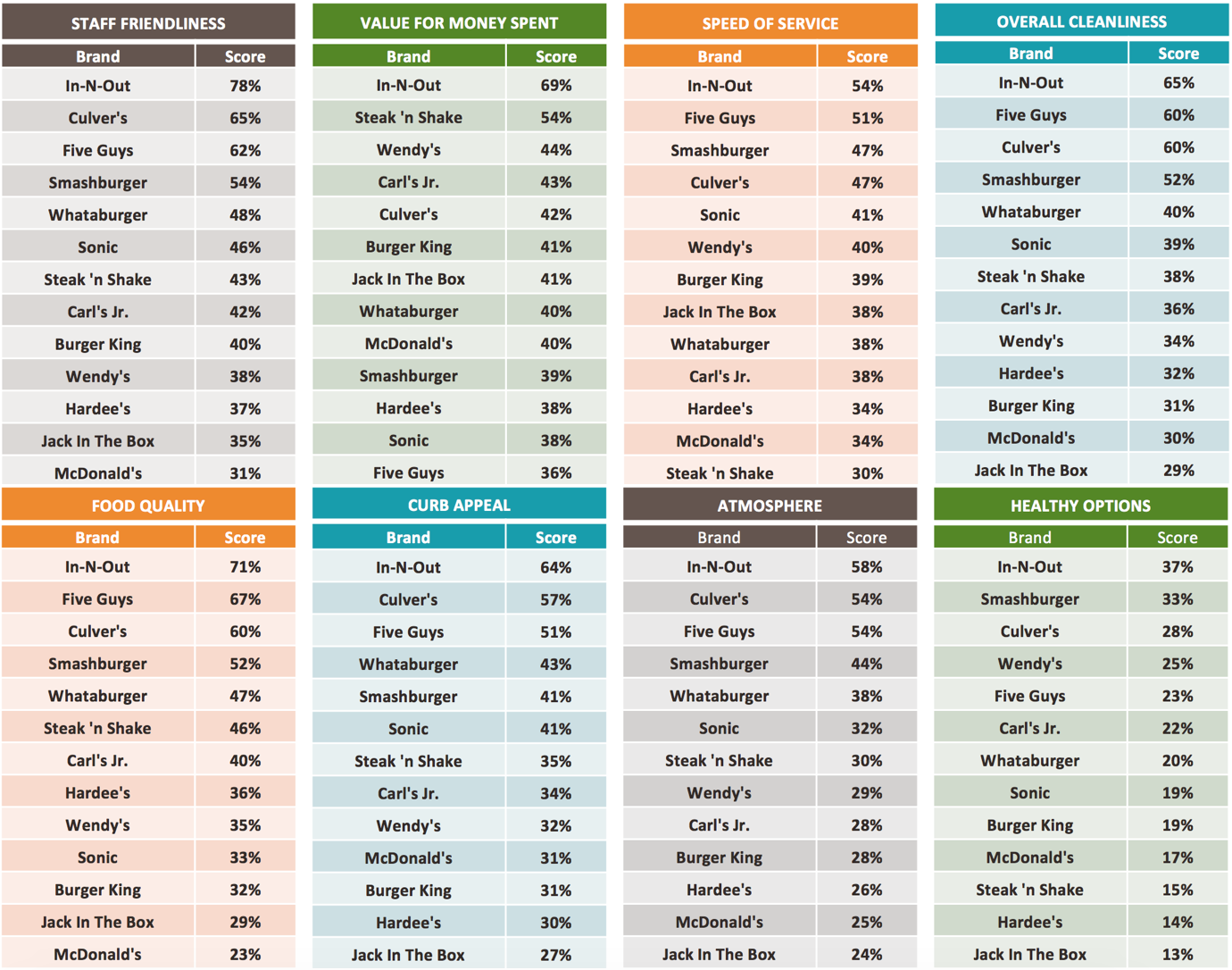 Sandwiches: Wawa Advances Four Spots to Unseat Firehouse Subs
More and more, QSR brands are seeing competition from convenience stores and, for the first time in this study’s history, a convenience store was named America’s favorite spot to grab a sandwich. 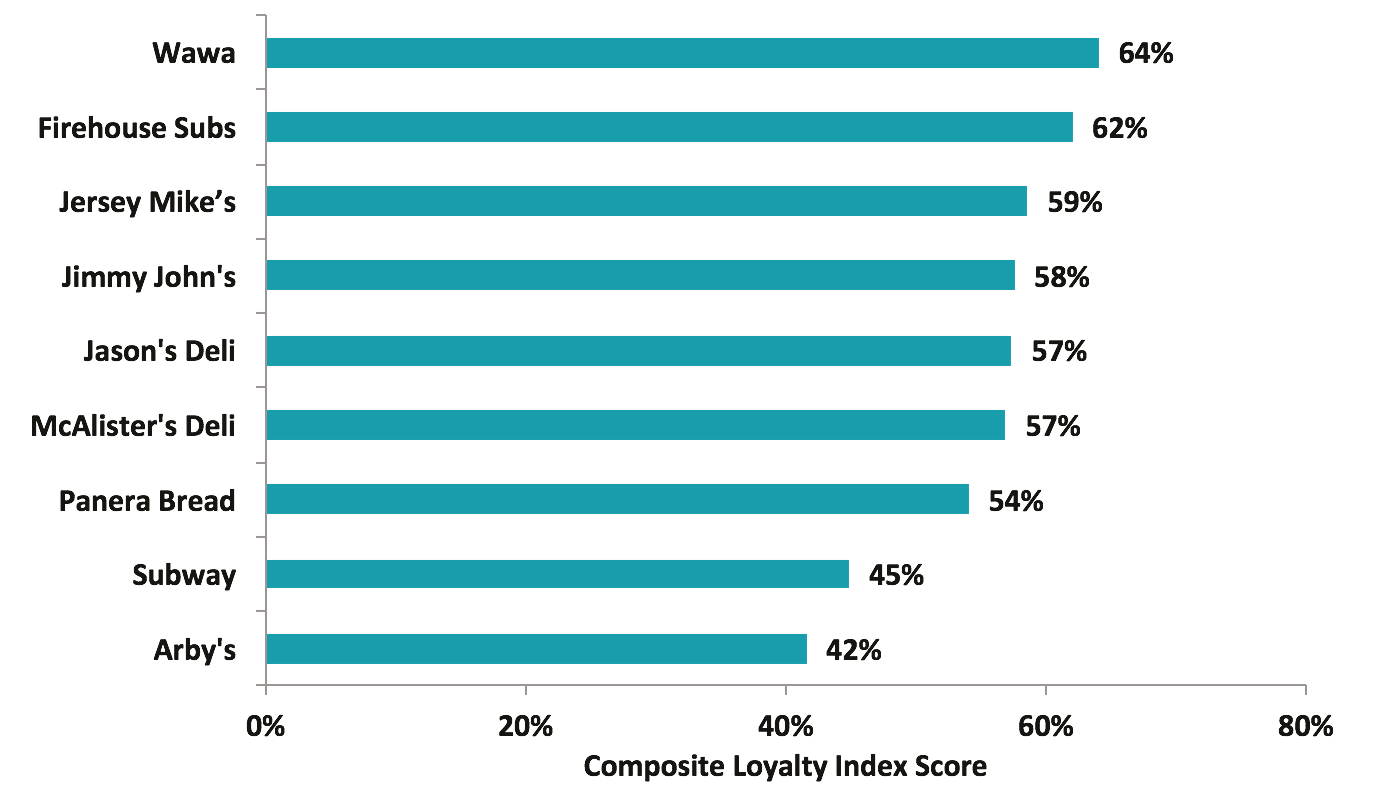 No single brand dominated across the eight customer experience attributes that Market Force studied, though Firehouse Subs took the top spot in two – food quality and atmosphere – and tied with Jersey Mike’s and Jimmy John’s for staff friendliness. Jason’s Deli came out on top for healthy options, while Jimmy John’s ranked highest for speed of service and overall cleanliness. Wawa was again No. 1 for value, five percentage points ahead of second place Subway. Arby’s was last in nearly all of the categories. [See Graph 4]. 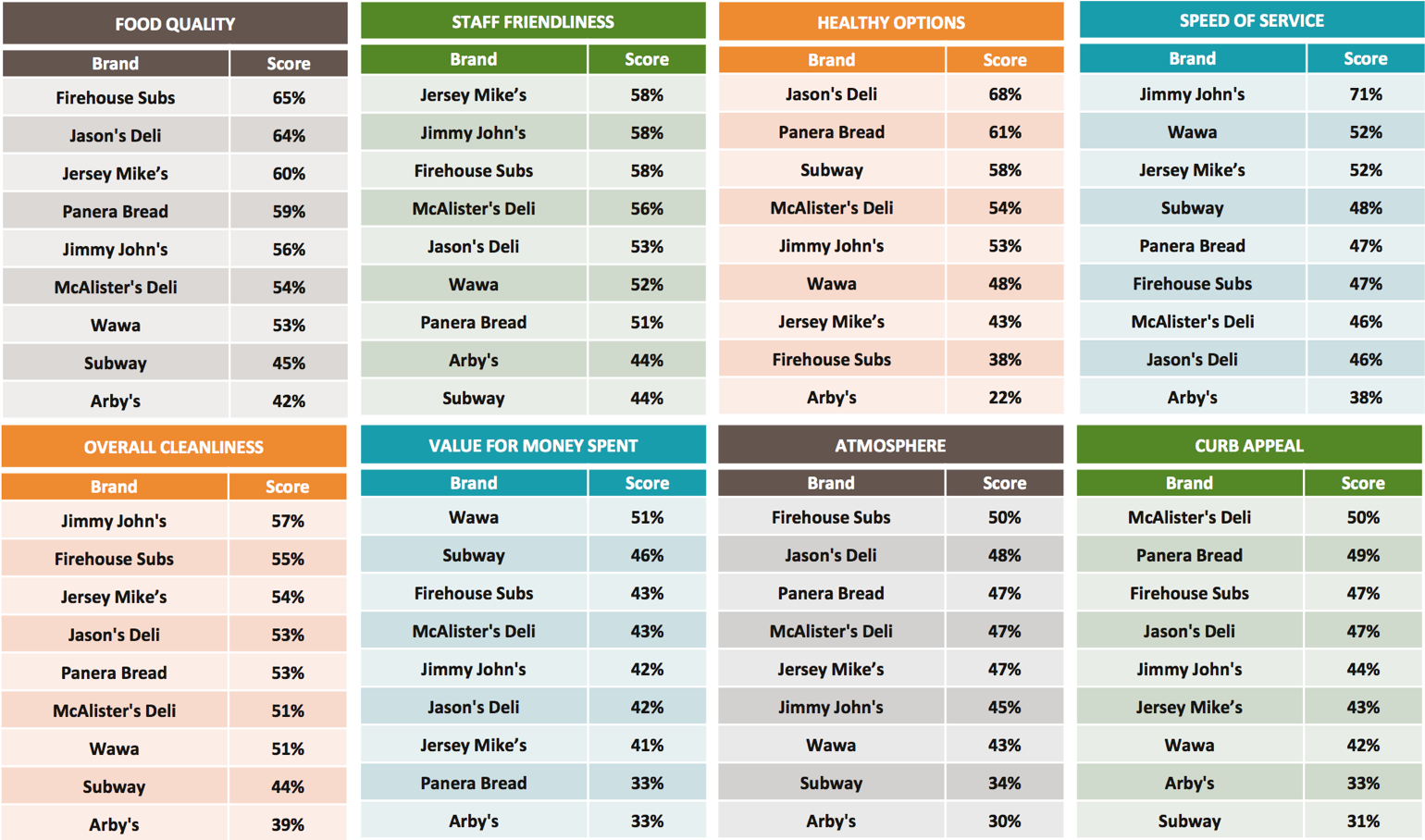 Other Sandwich Category Highlights
32% visited a sandwich chain at least five times in the previous 90 days
Half of customers chose take-out on their most recent visit, while 36% dined in
Only 12% brought children on their most recent visit
Panera led in loyalty card awareness – 78% know they offer one
Wawa once again has the highest mobile app awareness with 67%, up from 48% in 2017 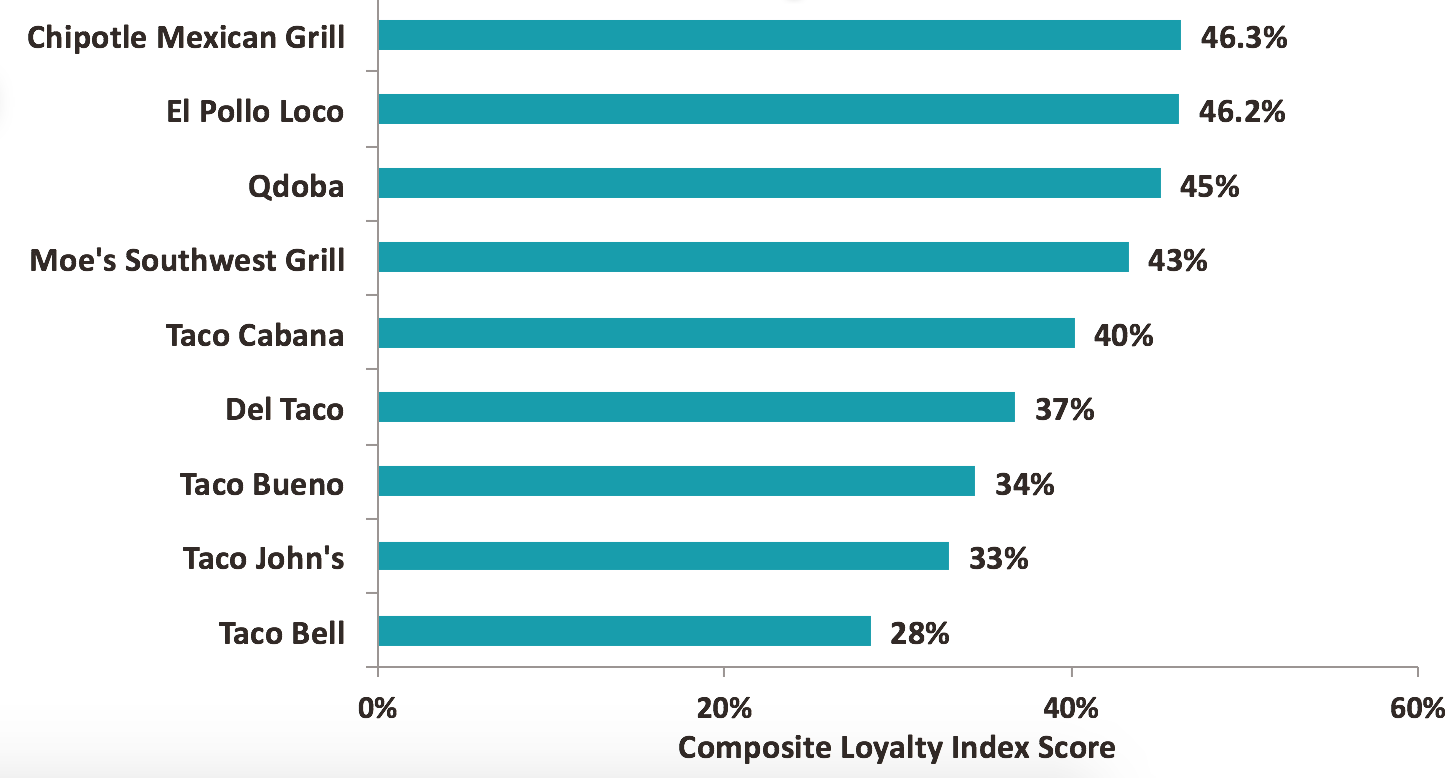 Chipotle earned the top spot for many customer experience categories, including food quality, service speed, healthy options and cleanliness. It also tied with El Pollo for curb appeal. Del Taco was the value leader, while Moe’s Southwest Grill was found to have the friendliest staff, and Qdoba the best atmosphere. Taco Bell, Taco John’s and Taco Bueno ranked toward the bottom in most categories. [See Graph 6.] 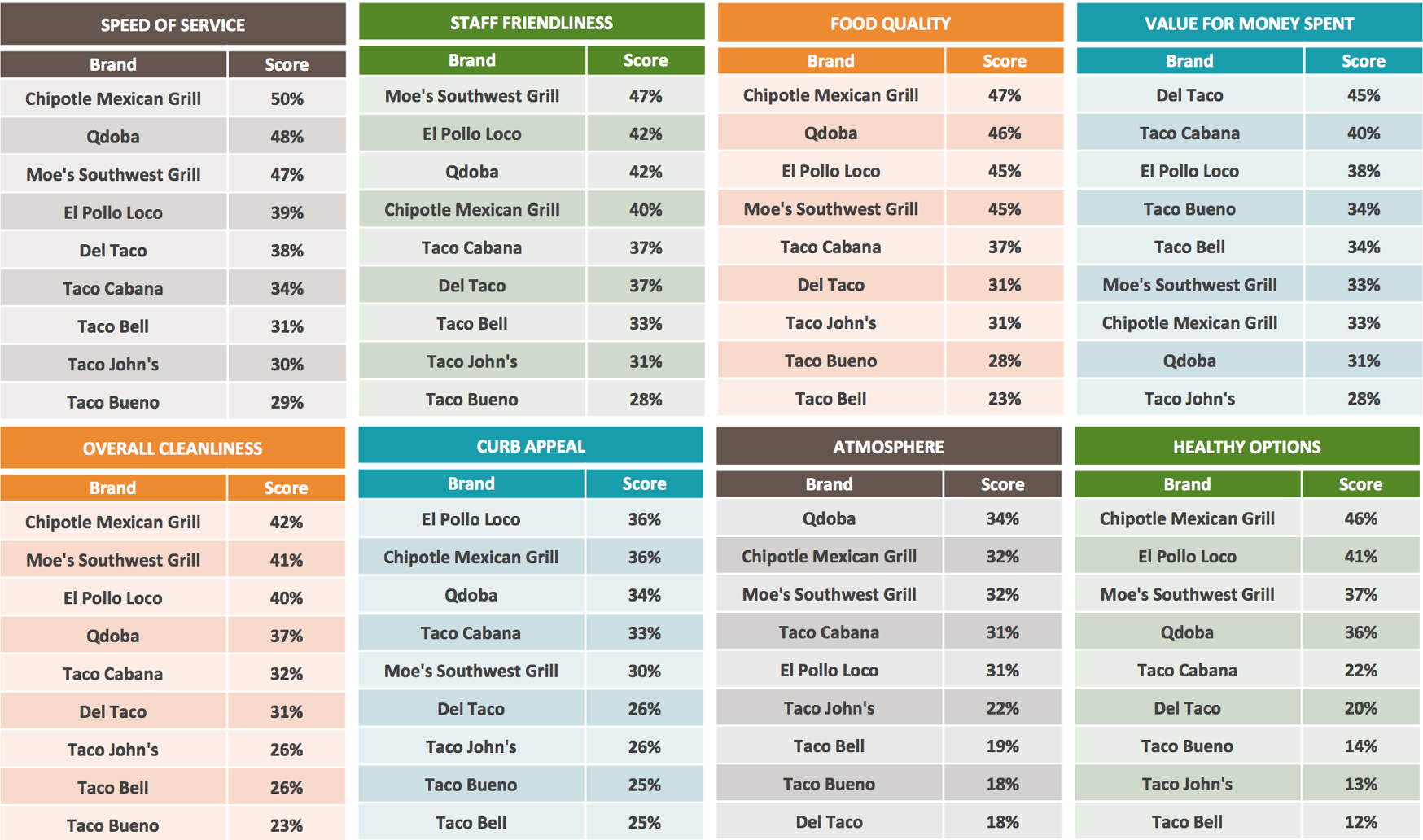 Pizza Ranch, an Iowa-based chain with 200 locations in 13 states, took the No. 1 spot this year in the pizza category, a title Marco’s Pizza held in 2017. Papa Murphy’s again came in second, followed by Marco’s Pizza, Domino’s and Papa John’s. [See Graph 7]. 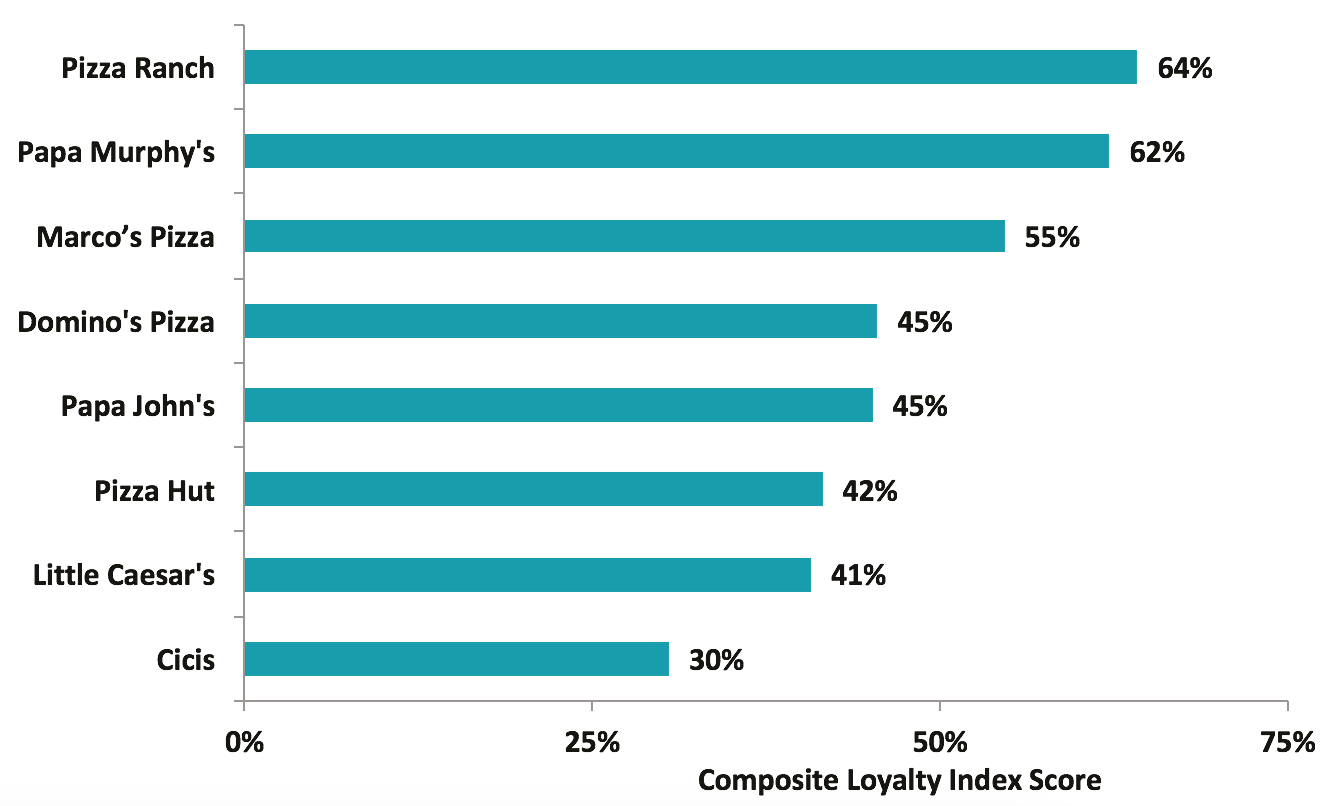 Pizza Ranch, Papa Murphy’s Excel in Customer Experience
Pizza Ranch and Papa Murphy’s led in every customer experience category except value, which went to Little Caesar’s. Papa Murphy’s was No. 1 for food quality, healthy options and cleanliness, while Pizza Ranch was a clear winner in atmosphere and curb appeal and was also found to have the friendliest staff and fastest service speed, best atmosphere and curb appeal. Marco’s Pizza also performed well, landing in the top three in five key categories. [See Graph 8]. 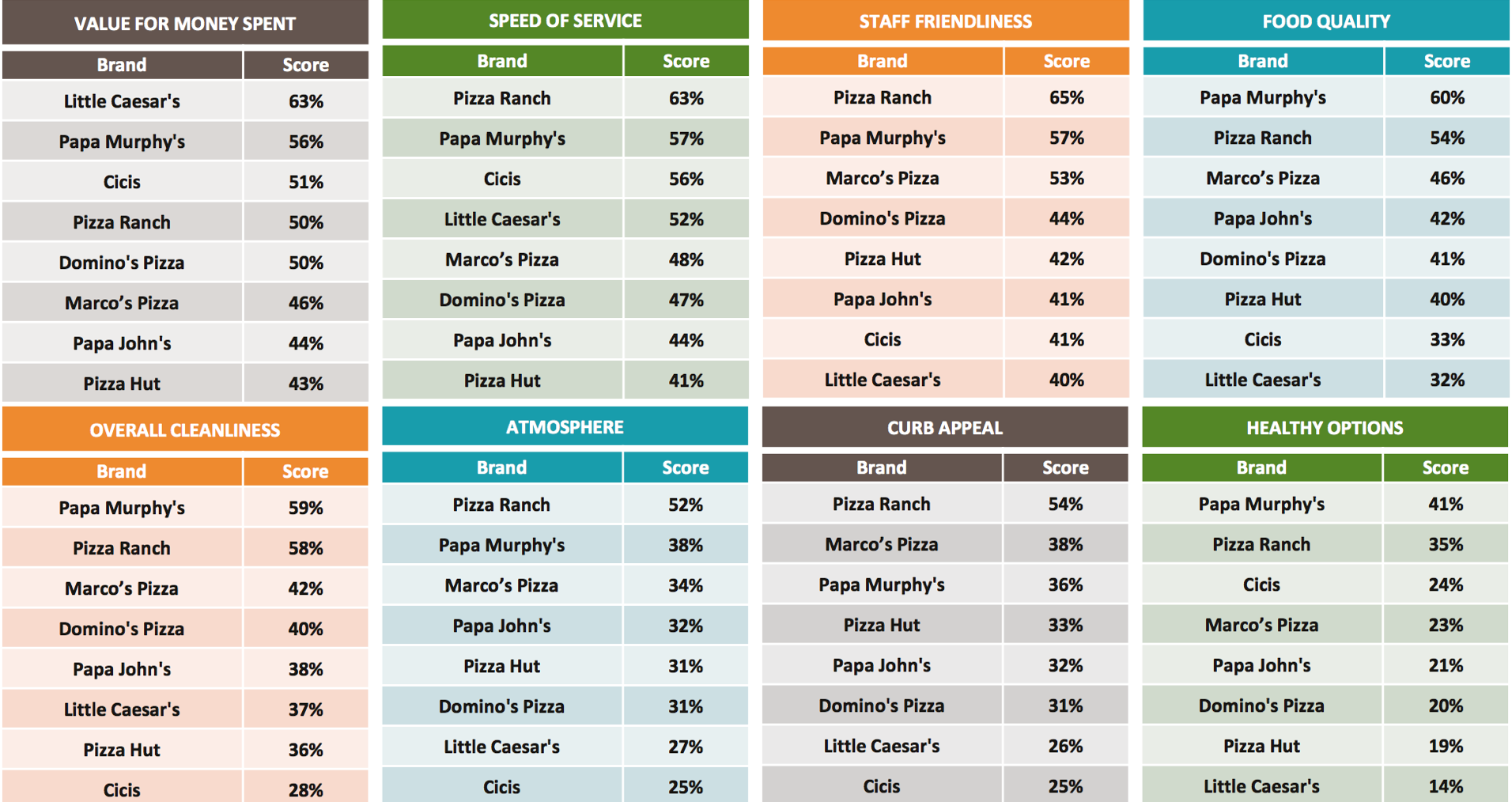 Other Pizza Category Highlights:
28% visited a pizza chain at least five times in the previous 90 days
Take out (55%) is still the most popular way to dine for pizza chain customers
21% brought children on their most recent visit
Pizza Ranch led in loyalty card awareness – 90% of customers know they offer one
Domino’s has the highest awareness for its mobile app – 67% are familiar with it
Chicken: Chick-fil-A Rules Roost for Fourth Consecutive Year
Chick-fil-A is America’s favorite chicken chain for the fourth straight year with a 73% score. Raising Cane’s ranked second with 68%, Zaxby’s and El Pollo Loco tied for third with 51% each, Boston Market ranked third with 46% and Popeyes rounded out the top five with 42%. KFC landed at the bottom of the 10 chains studied. [See Graph 9]. 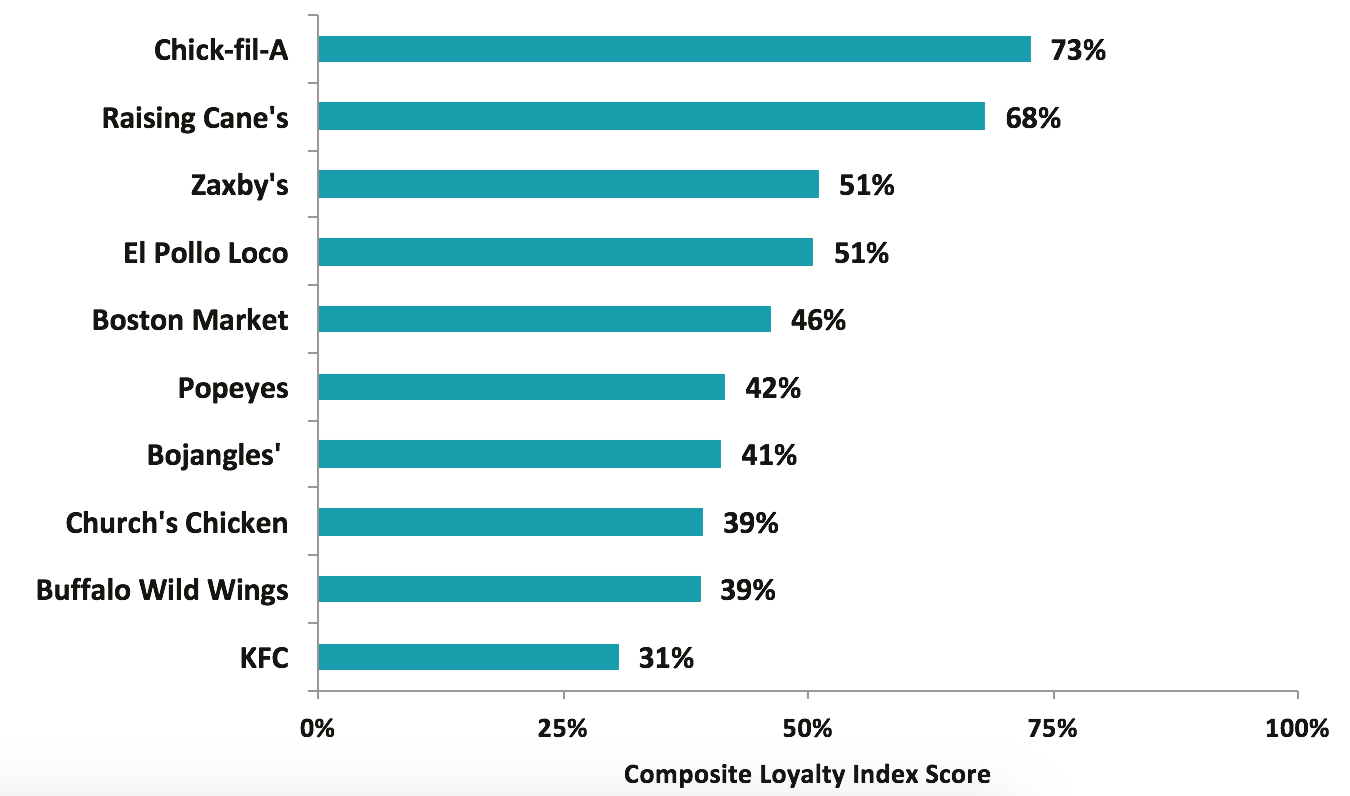 Chick-fil-A Lauded for Food and Service
Once again, category-leader Chick-fil-A received the highest scores in every category except healthy options, a top ranking that went to El Pollo Loco for the third consecutive year. Raising Cane’s also performed well, landing in second place in seven of the eight categories. KFC was last in six categories, and Buffalo Wild Wings was rated lowest for value. [See Graph 10]. 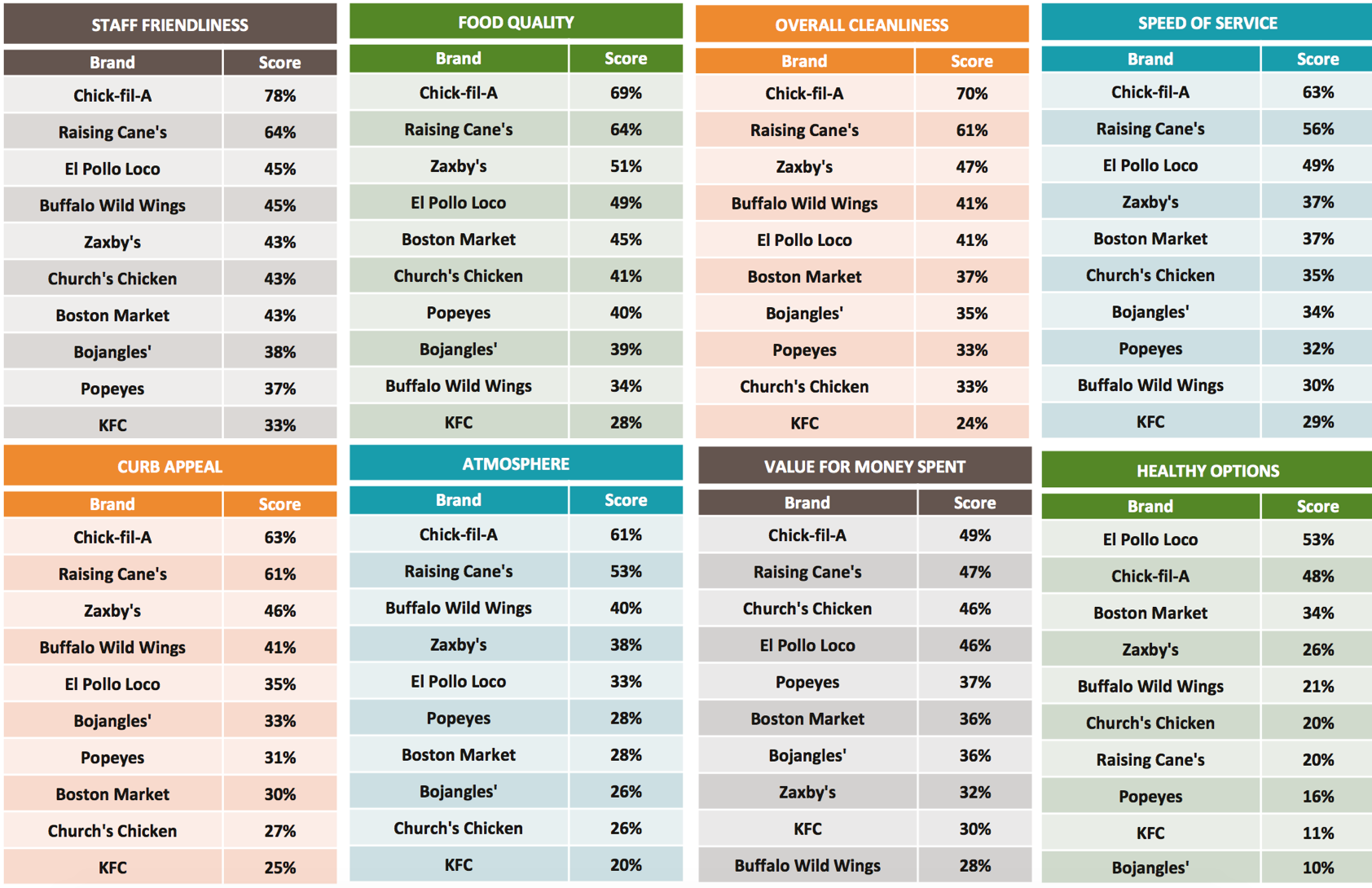 31% visited a chicken chain at least five times in the previous 90 days
The majority of customers opted for the drive-thru (39%), followed closely by those who chose to dine in the restaurant (33%)
20% dined with children on their most recent visit
Buffalo Wild Wings led in loyalty card awareness – 44% know they offer one
Chick-fil-A has the highest mobile app awareness with 55%, followed by El Pollo Loco with 45%

More Using Tech to Place Orders
The use of technology by QSR guests to place their orders continues to steadily grow, with 39% reporting that they ordered their meals via smartphone app in the past 90 days, a significant increase from 2015 when just 11% reported doing so. Additionally, 28% used a kiosk and 27% used a tablet to place their order. [See Graph 11].

Methodology
For the rankings, Market Force asked participants to rate their satisfaction with their most recent QSR experience, and their likelihood to refer that restaurant to others. The results were averaged to attain a Composite Loyalty Index score. Only chains that received at least 100 votes and representing 2% or more of votes were analyzed.

Demographics
The survey was conducted online in February 2018 across the United States. The pool of 11,487 respondents represented a cross-section of the four U.S. census regions. Fifty percent reported household incomes of more than $50,000 a year. Respondents’ ages ranged from 18 to over 65. Approximately 73% were women and 26% were men.

For more information on Market Force’s services for the restaurant industry, visit http://www.marketforce.com/industries/restaurants.

About Market Force Information
Market Force Information® is a customer experience (CX) management company that provides location-level measurement solutions that help businesses protect their brand reputation, delight customers and make more money. Solutions include customer experience surveys, employee engagement surveys, mystery shopping, contact center services and social media review tracking, which are integrated into one technology and analytics platform, KnowledgeForce®. Founded in 2005, Market Force has a growing global presence, with offices in the United States, Canada, United Kingdom, France and Spain. It serves more than 200 clients that operate multi-location businesses, including restaurants, major retailers, grocery and drug stores, petro/convenience stores, banking & financial institutions and entertainment brands. The company has been recognized as one of the top 50 market research organizations in the AMA Gold Report and by Forrester as a Breakout Vendor. For more information about Market Force, please visit us online at http://www.marketforce.com. 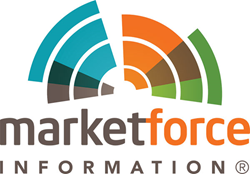 Boorito’s Back! Chipotle Brings Back Annual Halloween Celebration, Launches Costume Contest For A Chance To Win A Year Of Free Burritos

For The Love Of Bacon: Get A Free Wendy’s Baconator Through DoorDash January 28 – February 4